RECENT PROJECTS CARRIED OUT BY ARMKOR

This project was phase 2 where the customer extended their operations by taking the building adjoining the existing unit. A large customer had been acquired that required caster decking being installed airside and a mixture of caster decking and GRC roller beds internally. The project plan also called for a 10-foot scissor lift to be refurbished and another scissor lift to be re-sited within the building. In the initial project plan received from the customer there was a call for the supply of a 10ft Scissor lift to take the ULD’s from the outside caster decks (508mm high) to the internal floor mounted decks (290 mm high). Armkor were able to suggest to the customer that to save costs a “Four Poster Lift” be used. This a lift with a GRC roller top deck with 4 hydraulic rams at each corner.

Due to part of the works being carried out “Airside” at London Heathrow Airport (HAL). Due to Armkor having airside accreditation we were able to apply for the required installation permits in conjunction with HAL’s property surveyor’s department and also perform the installation as Armkor’s personnel are fully security checked and hold full access airside passes at London Heathrow Airport. 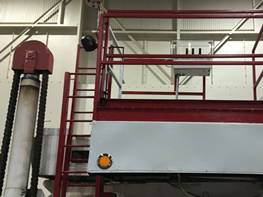 Armkor had carried various elements of work within the cargo facility, due to the quality of the previous works carried out, the airport approached Armkor with a view to refurbishing and carrying out safety modifications to a FMC Main Deck Loader within a predefined budget.

One of the main concerns was that the casters installed on the lower and upper decks were in need of being replaced due to wear and the majority had seized. This was also viewed as a trip hazard. Armkor proposed that the casters were removed and the void left was covered with steel plate. The steel plate was laser profiled to enable the installation of Stainless Steel Ball Transfer Units. Both decks were stripped of all paint, an undercoat of lead oxide was applied with two top coats.
The operator’s walkway and drivers cab were extremely corroded, with the floor panel of the driver cab being in a dangerous condition. The cab and walkway were cut out. A new drivers cab was fabricated and the walkway and cab floor replace with galvanised flow forge panels.

LED blinking lights were installed fitted to act as a visual warning to users on the airport apron that the MDL was in position and working. A new water tight stainless steel electrical control panel was manufactured to protect the electric from water ingress.

All the hydraulic motors were tested to ensure correct working. The rear rams were removed for servicing. The rods were rehoned, new seals fitted and due to one of the rams being fitted incorrectly in the past further remedial work was required to the ram housing. The rams were refitted with great care to ensure that they were straight. During the survey some of the hydraulic houses showed to be in the preliminary stages. These hoses and fittings were replaced. 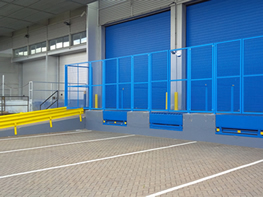 The customer was expanding their operations into a new unit. Armkor were requested to provide their services by refurbishing a 10 foot that was stored at the existing facility. The 10ft lift was transported to Armkor’s facility where is was stripped down. The Hydraulic rams were stripped down, with the Rod’s being rehoned and new seals fitted. All the bushes were checked for any excessive wear.
All bearings were checked and replaced where required. The scissor arms, and frame and impact barrier were stripped down. An undercoat of lead oxide was applied with two top coats of paint applied. A new holder was fabricated and installed on the lift to hold the new control dongle. Once the lift has been installed a new chain mail curtain was attached to the front lift to prevent access and debris being blown into the area of the frame. Fencing was installed to prevent access to unauthorised personnel.

Armkor were asked to provide a solution to ensure that Aviation Security regulations were adhered to by creating a sterile security area created on the loading dock. After a site visit and discussions with the client various options were presented to the client for consideration. The solution the client chose was to have the front of the loading dock fenced along the front with individual gates for each door on the dock. The fencing was manufactured at Armkor’s facility and installed by our personnel.

There was a requirement for barriers to prevent damage to the installed Caster Decking. Armkor manufactured and installed barriers with GRC rollers on the top to aid the transfer of aircraft pallets and bins from the transfer dollies onto the Caster Decking. Bollards were also manufactured and installed at various points within the facility to protect different elements of the installed equipment to prevent damage whilst tugs, dollies and forklift trucks move around the facility.